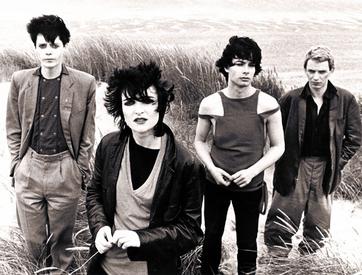 Well, the nights will soon be drawing in and the clocks will be going backwards so the best medicine for this change in the weather, is another week of my diverse shows and East Anglian drawl.

On Tuesday, I will be taking you back to a time when it was felt by the youth that there was ‘no future in England’s Dreaming’ so it had to be about the short sharp and furiously energetic blast of guitars.  Andy Warhol said  ‘in the future everyone will be world famous for 15 minutes’.  During these two hours, I will highlight with regular and consistent battering to you, that these guys and gals only needed 2 minutes and 59 seconds. There will be the usual mix of the well known new wave classics from Elvis Costello and Dave Edmunds, through to the lesser known, but no less classic tracks from The Cramps, The Fall, Television, Bauhaus and The Cure.  The infamous ‘Cover 2 Cover’ slot features two key bands from the era doing their very best to disguise 60s classics, and the ‘Go 2 Extremes’ slot, where we feature two diverse sides of punk and new wave legends, has a spotlight on Siouxsie and the Banshees.As always, the show must and forever will be, closed by us all standing for the National Punk Anthem.

On Wednesday, I get to revel in one of my favourite obsessions – a countdown. Everybody loves a countdown. And it doesn’t get bigger than counting down the Top 1000 most successful rock and metal songs of all time, completely exclusive to Lyme Bay Radio, painstakingly collated from years of chart data (actually between you and I, there was no pain because I loved every minute of it…).This week, we fastly approach the halfway point of the countdown, as I will be looking at #583-550.As usual, there is a mix of tracks from the 60s to the 10s including Metallica, Rush, Kiss, Biffy Clyro, Hendrix, AC/DC and no less than 6 – yes SIX Iron Maiden classics.The Classic Rock Album of the Week has been selected by Jackie Goates – the singer from acoustic duo James’ Field who we featured last week, and she has picked a 1974 forgotten classic from one of the biggest bands on the planet.I will be slotting in a track from the new Marilyn Manson album and the ‘Onwards and Upwards’ slot features a Black Country rock band called ‘Liberty Lies’. Hold on to your pants and turn it up to 11.

Acceptable in the 80s – Friday 9th

Calvin Harris agreed with me on this and October 1988 is no exception.  It was ALL acceptable.Stock Aitken and Waterman had been a tad scattered with their acts in 86 and 87 and then in 1988 along came their ‘voice’ – Kylie Minogue.  Whilst she does not appear in this weeks chart, she opened the door in 1988 to frankly a barrage of acts from the Hit Factory, many of which are dotted around our Top 30 on this week’s show.Don’t let that put you off!  As per every Acceptable in the 80s show, there was an incredible variety of styles, fashions and tone in the tracks featured;  Wee Papa Girl Rappers next to Bon Jovi; Bomb the Bass next to Phil Collins; and there was Bros.  On their own.  Because nobody wanted to stand next to them.There was a collection of re-releases of old songs fuelled by tv advertising such as The Hollies, Bill Withers and The Commodores. Dance music was shifting from the House sound to rave and we had Royal House and The Beatmasters driving this forward, alongside 80s heart throbs A-Ha and Duran Duran.I will be playing a track by a band soon to be huge in the 90s who had their second album released this week and a forgotten rock classic that was high in the Billboard US chart along with my usual memories, events and film clip to keep you full to the rim of pointless, useless and instantly forgettable facts.

Saturday afternoon is for chilling and relaxing (I refuse to say the combined word as that would be downright embarrassing coming from a 48 year old).  What better way to help you ‘chill-and-relax’ than to guess the year of the No.1 songs from this week in the last 60 years.Random is an understatement this week. There are some one hit wonders, some eternal classics and some which are better off forgotten and I promise to burn after the show.I will pay a track from two No.1 albums this week in 1989 and 2019 and close the show with those US No.1s that didn’t make it all the way to the top over here but realistically should have done.  This week I will squeeze in four; from 1965, 1970, 2003 and 2019.Then you are released back to the wild and be free from my voice for at least 3 days.