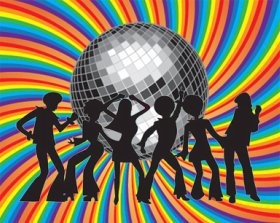 As has always been the case, the musical influences merged and mutated and the 1970s saw the rise of disco; an upbeat cousin to pop, funk, smooth jazz, latin, jazz fusion, and soul; which became one of the biggest genres of the decade, especially in the mid-to-late 1970s.

In 1977, the opening of the legendary Studio 54 in New York, captured the mood, joy and feel of 70s dance and disco music; and this is represented in the Lyme Bay Radio programme ‘Studio 70s’. Much 1970s music, and disco in particular, is music to dance and sing along to; music that brought a ‘smile to your ears.’