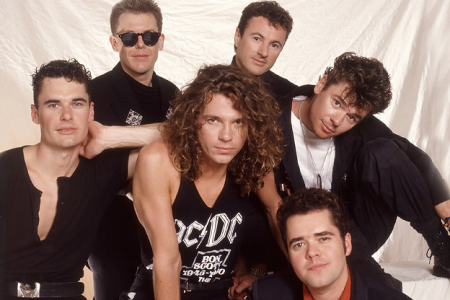 Another 2 hours of power driven 3 minute blasts of energy from the diverse punk and new wave acts during 1976-1981. This week we have the first airing in ‘England’s Dreaming’ of Gang of Four, Anti Pasti, Rachel Sweet and Subway Sect.I will be cramming in familiar explosive anthems of Dead Kennedys, Cockney Rejects and Stranglers with some lesser known gems from Sham 69, Ramones, Talking Heads and Joy Division.The now much acclaimed ‘Cover 2 Cover’ slot features two key bands from the era throwing down the gauntlet for covers of Eddie Cochran and Creedence Clearwater Revival tracks. The ‘Go 2 Extremes’ slot, where we feature two diverse sides of punk and new wave legends, has a spotlight on The Clash.The Punk National Anthem will send you to sleep.

The epic Lyme Bay Radio rock show continues the Top 1000 most successful rock and metal songs of all time this week counting down the numbers from #465-#429.This week you will hear some legendary rock epics from AC/DC, Bush, Rainbow, Limp Bizkit, Marilyn Manson, Pearl Jam and many more as the countdown climbs ever upwards towards that definitive number one.

The Classic Rock Album of the Week is another modern day classic from 1987.

I will be slotting in the latest Royal Blood single and the ‘Onwards and Upwards’ slot features a Swedish rock band and their new single.

Check that volume control for 11…

Acceptable in the 80s – Friday 6th

This week we go back 33 years to one of the most diverse years in the decade as I will spending 3 hours with you on November 1987.The first raves were happening across the country and music was interchanging across genres of rock, soul, rap, opera, reggae and jazz so this week you will have no idea what is coming next. You will be switching from Billy Idol to Public Enemy; INXS to Nina Simone; REM to Whitesnake. Music from movies was filling the chart and you will be pleased to know that there was limited Hit Factory tunes in this weeks chart. Come back to the 80s with me. You’re safe. And it’s all acceptable.

As we head closer to the festive period, theNumber Ones get bigger and there are more million sellers in this weeks show than ever before. But as ever I will drop some random and forgotten chart toppers. You will have no idea what’s coming up next so keep poised and guess the year from the last 60 years that each song was at the top this very week.
I will play a track from two No.1 albums this week in 1973 and 1985 and we close the show with those US No.1s that didn’t make it all the way to the top over here but realistically should have done from 1972 and 2019.
Let’s get each other through lockdown.