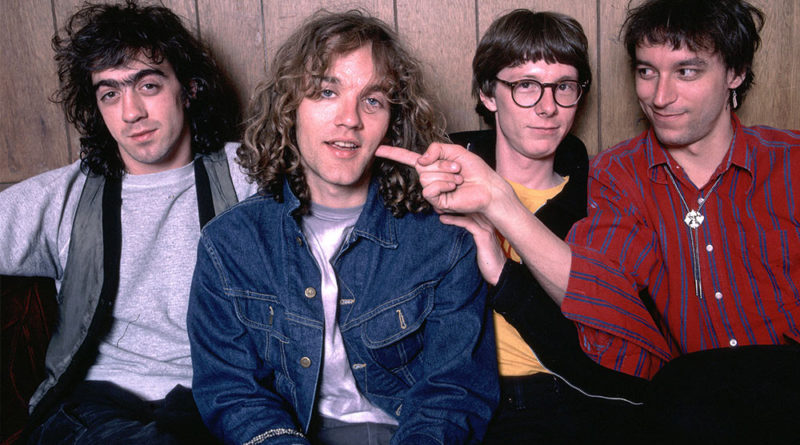 This week on Hidden Gems we’re showcasing the oddly specific “Earnest & Sincere 90s Pop-Rock” category. This choice was borne out of putting together last week’s grunge special, when I kept encountering bands and tunes that definitely weren’t grunge (too radio-friendly and neatly constructed) but that all had a certain ‘something’ in common.

It was a funny era for rock music, its last hurrah as we now realise. By the late 90s, rock and hip-hop’s long-distance relationship had awkwardly fused in the form of rap-rock/nu-metal, (I’ll see if I can salvage anything from that often calamitous mixing on a future show) and radio-pop, electronica and R&B were becoming so sophisticated and ubiquitous that it was only a matter of time before they overtook the “guys (or occasionally girls) with guitars” as the dominant popular music paradigm.

But before that shift took place, there was this final burst of earnest, sincere, lyrically inventive if musically vanilla…stuff. It dominated the airwaves at the time, gamely holding those other genres at bay (I distinctly remember a radio station billboard in Perth proclaiming, “We don’t play anything with ‘yo’ in the lyrics” ) whilst often producing bafflingly high sales volumes. As well as the last gasp of pop-rock, this was the final fling of the CD era, before Napster took hold and the shift towards downloads and streaming began. As such, some of the artists on tonight’s show sold ridiculous quantities of records and are now doubt chilling in their lush mansions right now wondering where it all went so right. On with the show.

‘The look’ from the decade that fashion forgot. Bright colours, smiles or anything resembling frivolous rock-star behaviour is strictly prohibited.

Kicking things off is a total one-off from Edwyn Collins, citrusy Scottish post-punk maven who inexplicably delivered this gorgeous slice of 60s-influenced groovy pop-rock A Girl Like You (listen to those gorgeous jangly keyboards! One of the last appearances of that instrument tonight) into the heart of the post-grunge musical landscape of 1995. The equivalent nowadays would be the lead singer from The Horrors or Does it Offend You, Yeah? (remember them? I don’t blame if you don’t) putting out a beautiful 80s-themed synth-pop masterpiece in 2020. It’s unbelievable that it happened once and will almost certainly never happen again.

Next up is 90s pop-rock superstars REM with the magnificent Sweetness Follows from their era-defining Automatic for the People album. As with the album’s other tracks, it conjures a lush, baroque atmosphere replete with outstanding string arrangements that calls to mind long evening drives and grand, silent manor houses at three in the morning. Michael Stipe’s voice has graduated from the shy, mumbly introvert of their early records into that of a wise, confident frontman.

Following on is The Bodeans with Closer to Free, the first entry in tonight’s “that was a hit?” stakes. It contains many of the elements that made choosing tonight’s tunes so intriguing – a little riff, some vague ‘positivity’ lyrics, a jaunty tempo for three minutes, and it’s on the radio. OK then.

Next up is the fascinating Natalie Merchant, singer of 10,000 Maniacs and her lovely solo offering Carnival. This sums up the indescribable quality of this mini-genre – what is this? It’s groovy (sort of – almost a Madchester-esque beat), the lyrics are intelligent (the last time radio-pop valued quality lyricism?), Natalie “undersings” it (this is pre-Pop Idol and its army of Mini Mariahs remember) and it just plods along with its thoughtful little message about being ‘hypnotised, mesmerised, by what my eyes have seen’. Then you find it stuck in your head for the rest of the day.

Next we have the greatly missed Jeff Buckley, one of music’s most tragic losses, with the gorgeous Last Goodbye from his Mystery White Boy live album. He had so much talent and could seemingly do anything (including improvising an opening about eating a lot of French cheese), drawing influences from practically every genre and infusing it with pure 90s earnestness and sincerity. Tragic.

On the playlist next is Collective Soul, a band who no doubt described themselves as “grunge influenced”. Just like with Bush, who I chose to include last week, this is slightly ‘grunge by numbers’ with the crunchy guitars, plodding tempo and hilariously ‘grungy’ distorted “yeahs”. It also carries on the weird grunge tradition of religious references (seriously, for a bunch of edgy nihilists there are constant mentions of God, Jesus and Heaven in all the classic grunge tracks). Ah, the 90s.

Next up is Live, with their ubiquitous Lightning Crashes from the enormous-selling Throwing Copper album. (Though in keeping with the night’s theme, when was the last time a lyric as weird as “her placenta falls to the floor” found its way on to the charts?) I was obsessed with this song as a youngster and its cathartic nature still holds up all these years later. If you ever see an Aussie pub covers band, they WILL play this song at some point in the night.

Coming up next is Counting Crows, a band who embraced everything the 90s had to offer with their raggedy, lyrically-heavy take on pop-rock and some enterprising use of accordion. This song is particularly gorgeous and is an underrated ‘lighters in the air’ classic.

Next is possibly my favourite song of the night, Goo Goo Dolls’ beautiful little ditty Name. It sums up everything about the sound I’m trying to capture on this show, calling up nostalgia for a long-lost time with those lush acoustic guitars. They had a much bigger hit a few years later with Iris, which I hated at the time as it pushed the inherent sentimentality of their music just a touch too far into the red, and no doubt provided some of the template for their less than stellar successors like Train and Jason Mraz. It’s a delicate balance this sincerity stuff.

Cut from the same cloth is the Gin Blossoms’ Hey Jealousy, which perfectly captures the 90s slacker vibe in radio-ready form.

Concluding our first hour is Melbourne songstress Merril Bainbridge with Under the Water, a song I ummed and aahed about including tonight as it is very much on the pop side of the pop-rock metric. Still lovely though, and it’s nice having a break from all that angsty testosterone and its chugging guitars.

We enter hour two with the Cranberries’ one-off Dreams, a song that was ubiquitous in 90s coming-of-age films and is a radical departure from their usual politically-charged rebel rock, coming off like a cross between the Sundays and Fleetwood Mac.

Next we head to the decade’s end for some treasures spared from the rampant rap-rock apocalypse. Firstly is Sugar Ray’s lovely Falls Apart, classic 90s melodic balladry fronted by Mark McGrath, who was quite the pop pin-up amongst the girls at my high school in 1999. Hilariously, it features 1.5 seconds’ worth of vinyl scratching post-chorus, as dictated by the Great Rap-Rock Decree of 1999 which insisted that every band have a DJ, even if the poor bugger only got to contribute for a few seconds per song before being drowned out by guitars.

Next is pop-punks Blink-182 with Adam’s Song, their first foray into proper singer-songwriter territory with this dark and moving teenage suicide elegy. Not what you expect from an album with a porn-star on the cover, a lot of dudes would have been sucker-punched by this one. And how about their secret weapon, Travis Barker’s unnecessarily amazing drumming? Pop-punk’s Keith Moon?

Following on is Fuel with Shimmer, a song absolutely beloved by Aussie pub-goers which somehow bears up to repeated listening.

We couldn’t do this show without Semisonic’s Closing Time, 1998’s entry into the earnest and sincere category which builds to a surprisingly epic conclusion despite its uber-mundane subject matter.

Next up is a band who are no doubt dwelling in those mansions I mentioned earlier – Hootie and the Blowfish. Their debut album Cracked Rear View is the 19th best-selling album EVER in the US. For reference, that puts it higher on America’s all-time charts than any Beatles album. What was the secret of their success? No seriously I’m asking you, I have no idea, as this just sounds like enjoyable but forgettable meat and potatoes pop-rock to me. Imagine lucking out as the bass player for Hootie and the Blowfish, earning several times the life-time salary of Peter Hook or Jah Wobble on the back of one album’s work. Music’s ultimate winning lottery ticket.

Next up is 1996’s One Headlight from Jakob Dylan’s band The Wallflowers. Funnily enough, his Dad put out his best album in 25 years the following year – Time Out of Mind. Bit of family rivalry going on?

Next we have a perfect one-hit wonder from 1994, Deep Blue Something’s Breakfast at Tiffany’s. The lyrics capture something quintessentially 90s, the sly pop-culture references that would find their full flowering in a film from that same year, Pulp Fiction.

Returning to the beginning of the decade with the song that I like to describe as “like 4 Non Blondes’ ‘What’s Up’ but listenable” with Concrete Blonde’s Joey (aka I’m Not Angry Anymore). This song also features the classic Be My Baby drum intro, as heard on Just Like Honey and doubtless 100 other songs.

Next up is Third Eye Blind’s Semi-Charmed Life, probably the cheeriest song ever written about drug abuse, featuring a cacophony of bizarre fast-tempo lyrics that Eminem would approve of. That guitar riff is iconic though.

Another of my favourite “where the hell did that song come from” tunes now with The Verve Pipe’s surprisingly moving The Freshman, which tells a disturbing story of a drug overdose in impressively impressionistic style.

Next is another entry for the ‘Hootie Hall of Fame’ is Matchbox 20, who crashed the charts in 1996 with tunes that took the self-deprecation and angst of grunge and spun it into millions. It’s begrudgingly impressive how they pull it off. Their singer Rob Thomas then landed the double-lottery win by singing on Carlos Santana’s planet-sized Smooth the following year, kicking off the late-90s’ Latin-pop-rock trend which found its nadir with Geri Halliwell’s Mi Chico Latino. Smart man.

Coming to the end of the show now with a personal favourite of mine, Blessid Union of Souls’ I Believe, a song which conjures hope, understanding and tolerance from the ashes, which I’d like to think works well as an uplifting message at the end of this bizarre year of enforced confinement.

Bonus track to get us to two hours is 10,000 Maniacs with Candy Everybody Wants. Any idea what the lyrics are about?